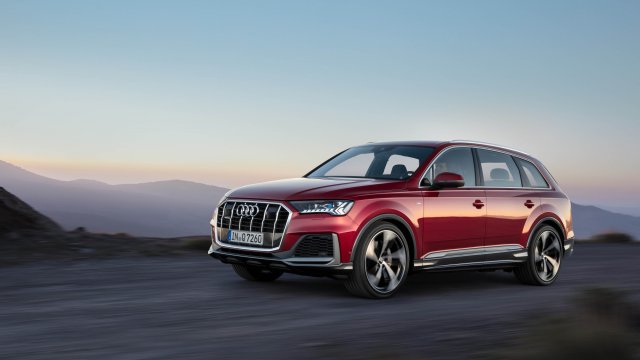 We knew this refresh was on the way, and now here it is: The 2020 Audi Q7. The three-row SUV is the largest Audi SUV out there, and it gets slightly (0.4 inch) longer with this update. Audi positioned the smaller Q8 as its flagship SUV this year, but this improved Q7 is out to make your decision a bit tougher.

Both the front and rear fascias are massaged to adopt the newest SUV styling from Audi, looking a bit more like the Q8 from the front. New headlights with Audi's latest LED tech are on board, as are newly styled LED taillights that look properly trippy. The inside of the Q7 is the bit that went through the most substantial changes. Just like the Q8, the Q7 adopts Audi's latest MMI, making sure it has the newest tech the company has on offer. Then the actual interior design in the front cabin is pretty much a carbon copy of the Q8, which is generally a good thing. Audi makes knockout interiors, and this one is no exception.

There are suspension upgrades coming your way, too. The electromechanical roll stabilization from the previous SQ7 is now available as an option for the normal Q7. Four-wheel steering is also available as an option. Powertrain discussions will have to wait for another day, because Audi is releasing Europe-only details for the time being. They'll get a couple diesel engines to begin, followed by a gasoline engine and a plug-in hybrid powertrain. We'll expect to see the latter two here. All of the engines will be mated to an eight-speed automatic transmission and all-wheel drive. Audi's 48-volt mild-hybrid electrical system will be in play for these powertrains, too. Power figures aren't available for any of the options, but we'll be looking out for U.S. specific engine details anyway.

Audi says the new Q7 will be launching in Europe in mid-September this year. We'll expect the big SUV to arrive in U.S. dealers not long after that, possibly in time for the holiday season. We don't expect to see any massive price changes to arrive alongside this update, either. The Q7 with the 2.0-liter turbo starts at $54,545, including the $995 destination charge.